Use the NPC box to help summarize the vital stats of a particular mob or NPC. 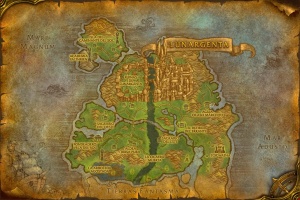 faction
Specify one of "Horde", "Alliance", "Neutral", or "Combat" (for mobs). Used to create the crest of the infobox
name
The name of the NPC. Defaults to {{PAGENAME}}.
image
The filename of an image to include (Image will be scaled down to 200px width or 300px height, whichever is greater). See Wowpedia:Nopics for placeholder images to use.
title
The title of the NPC that appears in brackets below the name, e.g. <Destroyer of Worlds>
gender
The sex of the NPC. Specify "Male" or "Female". Default not shown.
race
The race/model of the NPC. Braces automatically included (braces not necessary)
creature
In game classification. (e.g. Humanoid, Beast, Demon, Mechanical, etc)
level
The level of the NPC. Defaults to "??"
type
Specify "Elite" if the NPC is Elite, like a city guard or "Boss" if the NPC is a Boss (city or instance). Defaults to Normal which is not shown.
health
The amount of health this NPC has
mana
The amount of mana this NPC has
money
The amount average amount of money that drops when this mob is killed
aggro
displays if the NPC is aggressive to horde or alliance
repfaction
The reputation faction that the NPC is allied with. Usually a capital city (braces not necessary)
location
The specific subzone or coordinates of the NPC. Braces necessary
character
One of the playable classes in WoW or the RPG; unit or lore class if character is pre-WoW. As many can be listed as needed.
occupation
the character's role and/or position
status
"Alive", "Undead", "Active" (when referring to gods, demigods and related beings), "Imprisoned", "Deceased" or "Unknown". If imprisoned or deceased a short summary can be included. Characters killed by players in WoW are to be listed as "Killable" regardless of circumstances.
relatives
spouses, siblings, parents, children, any other family members. Please put the relationship in parenthesis.
mentors
If the character wields magic, then that person's teacher can be listed here.
students
If the character had an apprentice, or students then those characters can be listed here.
companions
Friends or group members.
source
Game(s) (or other sources) where character is seen.
instance
putting the instance name here will add a collapsible info box for the instance bosses (assuming the instance page is set up correctly)